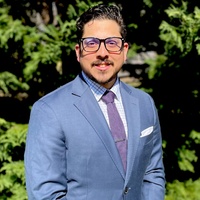 As the Director of Operations and Marketing, Robert strives to cut through the everyday noise so that the firm and our clients can focus on what is most important. Robert is a skillful problem solver and knows how to organize the challenges of life.

During his 14+ years in the Army and as a Department of Defense (DoD) civilian, Robert managed the worldwide operations for a Special Forces legal team and the largest legal office in the DoD. These experiences instilled in Robert the ability to adapt quickly to changing circumstances, to find creative solutions to the most complex problems, and to overcome obstacles.

As a veteran and first generation American, hard work and perseverance are an integral part of Robert’s DNA. Robert is a Bronze Star recipient, earned during his second deployment to Afghanistan with the 7th Special Forces Group (Airborne).

Above all else, Robert values family.  He and his wife, Tina, have two children, Robbie and Presley, and a labradoodle, Moose, named for their years stationed in Alaska. Robert’s dad, Vinnie, also resides with them. Ultimately, wanting more quality time with his family is what prompted him to retire his service from the Army and civilian role in the federal government.

The drive for a work/life balance, both for himself and for our clients, makes Robert the perfect fit for the Authentic Wealth Partners team.